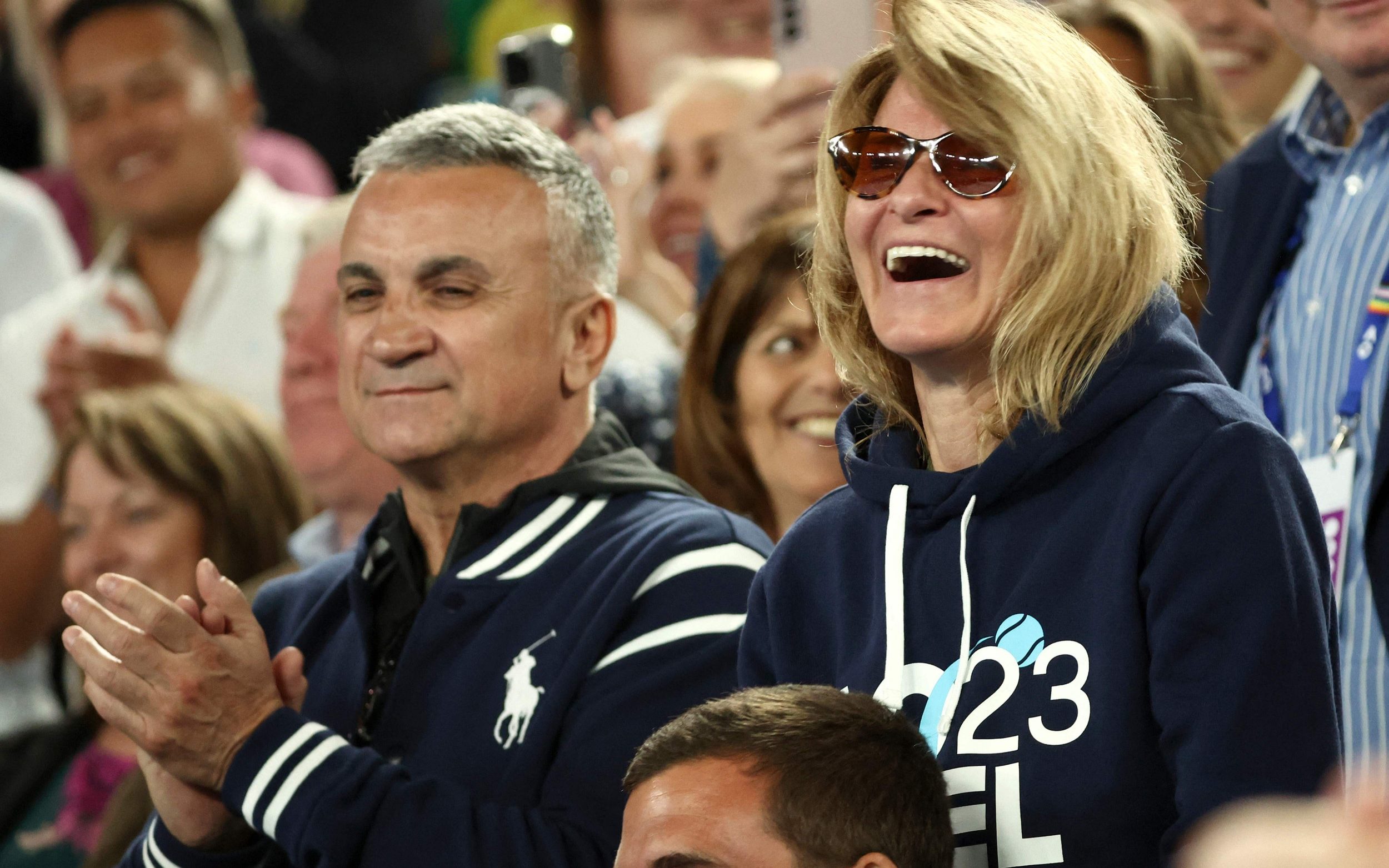 Alexander Zalostanov is the president of the Night Wolves – a motorcycle gang based in Moscow who have been described as “Putin’s Angels”. As the film moves on, we see the same main speaker send greetings to “our brothers in Donbas and Luhansk”, and to the International Brigade “Pyatnashka” – an international militia that fights on behalf of the Russians and contains a strong Serbian element.

Tennis Australia said: “A small group of people displayed inappropriate flags and symbols and threatened security guards following a match on Wednesday night and were evicted. One patron is now assisting police with unrelated matters.

”Players and their teams have been briefed and reminded of the event policy regarding flags and symbols and to avoid any situation that has the potential to disrupt. We continue to work closely with event security and law-enforcement agencies.”

There were at least four people carrying pro-Russian regalia within Melbourne Park on Wednesday night, even though Russian flags have been banned by Tennis Australia since one was flown during a first-round match between Ukraine’s Kateryna Baindl and Russia’s Kamilla Rakhimova.

The four included the main speaker mentioned above, another man with a Russian flag, a man holding a Night Wolves flag, and the fan inside the stadium who removed a white shirt emblazoned with Djokovic’s name to reveal a black T-shirt underneath with the “Z” emblem on it.

An unwitting Djokovic later signed this man’s white shirt as he did the rounds of the Serbian fans within the stadium at the end of his 6-1, 6-2, 6-4 victory over Rublev.

The video of Djokovic’s father was posted on the YouTube channel of Simeon Boikov, a pro-Russian activist who is being sought by Australian police after allegedly assaulting a 76-year-old man at a rally for Ukraine in Sydney.

The video also shows Tennis Australia’s security guards eventually arriving at the steps where the demonstrators are holding their impromptu rally. The guards do not interevene as perhaps 10 fans chant, “We love Putin.”

In a video posted on Tuesday, Boikov – who goes by the handle of “The Aussie Cossack” – warned that there would be pro-Russian activity at the Australian Open.

“Djokovic plays Andrey Rublev,” Boikov said. “I hereby appeal or instruct everyone to get down there. I can confirm that we’ve got some surprises.

“Tennis Australia brace yourselves… for fans, for people who love tennis, if you know what I mean. I’ve got to word it that way or they’ll get me for incitement. We’ve got a lot of serious fans in Melbourne heading down.

“The Russian empire has had its flag banned. Well guess what, Tennis Australia? Good luck when the empire strikes back.”

The Ukrainian ambassador to Australia, Vasyl Myroshnychenko, has condemned Wednesday night’s scenes. “It’s a full package,” said Myroshnychenko. “Among the Serbian flags, there is a Russian flag, Putin, Z-symbol or chanting pro-Russian songs. It’s such a disgrace.”

Meanwhile the former Ukrainian player Alex Dolgopolov, who is serving with the Ukrainian army, tweeted the image of the man with the two shirts, accompanied by the message “This guy will get banned for life, at least for all Australian events, right?” Dolgopolov then posted another short video of the demonstrators and said, “Seems he was not the only one. Tennis Australia, what’s going on there?”

Representatives for Novak Djokovic have been contacted for comment.