Race-by-race preview and tips for Rosehill on Saturday 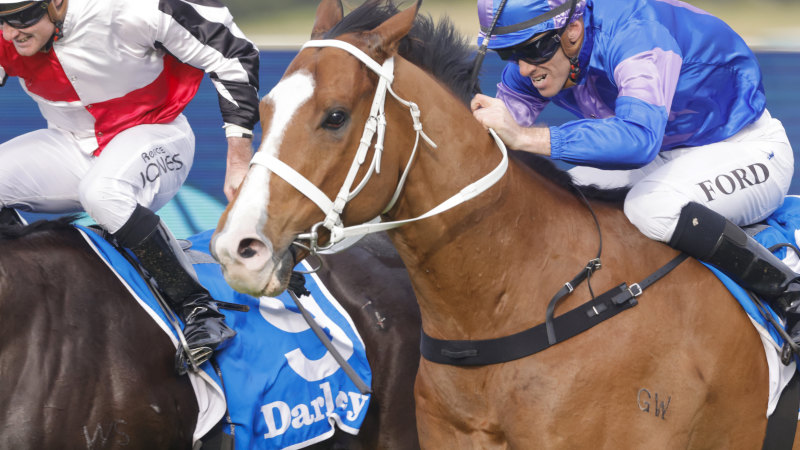 9. Perfect Proposal started favourite in the Gimcrack Stakes on debut and although beaten lost little in defeat. She held down second comfortably and has now had the benefit of a preparation under her belt. The Russian Revolution filly has trialled twice since then and would be surprised if she doesn’t find the front again, which sets up well tackling the Rosehill 1100m. Tim Clark sticks.
6. Learning To Fly got the better of her in their most recent trial but can’t justify the price discrepancy given Perfect Proposal has race experience on her side and looks likely to control her own fate in front. 11. Steel City is likely to settle outside of the leader, just as she did when second to Red Resistance on debut. The pair got control in front so were entitled to fight out the finish but there was four lengths back to third and respect that she jumped $2.30.
How to play it: Perfect Proposal to win.

Taking the punt that 1. Erno is ready to fire now third up having spent three years on the sidelines prior. Three years! The now six-year-old resumed at Gosford and ran seventh but caught the eye late suggesting that there was still something there for Kim Waugh to work with. Then second up he got shuffled back in a muddling run race before striking traffic problems late. Erno comes back to BM72 company and should be able to settle in the first dozen. From there it just comes down to angling into the clear. 3. Kibosh resumed from a year off herself two weeks ago with one soft 740m trial under her belt. Well set up over further with that run under her belt.
5. Cheerful Legend has hit the ground running for Nathan Doyle.
How to play it: Erno to win.

Suspect this race will be won or lost in the first couple of hundred metres. Whichever jockey of the three main hopes can secure the best spot in what promises to be a battle of tactics. Over to you Reece Jones on 10. Spacewalk. Nothing went right for Spacewalk at Rosehill first up, where he returned a gelding. He fired up in the middle stages, got shuffled back in the run and then couldn’t get clear until it was all too late. After the claim of Jones, the three-year-old carries just 51.5kg. He’s just too well placed not to give another chance to. 4. Dehorned Unicorn was wide and working throughout last start, where little separated him and Spacewalk. Little separated the pair in betting too so don’t dismiss the Joe Pride-trained sprinter. 2. Kalino is tearing through the grades.
How to play it: Spacewalk to win.

Three-year-olds have a terrific recent record in this race winning three of the past five runnings and that wouldn’t be lost on James Cummings who launches 9. Golden Mile’s autumn preparation here. Golden Mile made big leaps forward last campaign and, although he won the Caulfield Guineas and Callander-Presnell out to the mile, there’s an easy argument to be made that he was at his most explosive over 1400m. Long story short, he should be sharp enough to cope with 1200m first up with one 740m trial, where he caught the eye. 4. Forbidden Love trialled like a rocket at Warwick Farm recently, winning by near seven lengths. It’s just a leap of faith to take short odds about her based purely on one trial. For whatever reason she just didn’t come up last campaign.
How to play it: Golden Mile to win.

Going to give 4. Bold Mac another chance in what looks a very winnable race. The former Kiwi was excellent first up over Rosehill chasing home Vreneli in a race that produced the subsequent Carrington Stakes quinella. The five-year-old was posted wide and working throughout last Saturday when fourth behind Beaufort Park. Forgive him that. The return to Rosehill can only be a positive given his two previous runs at the track and the drop back slightly to 1500m looks a positive too given the little query that remains over him running a strong mile. No excuses. 2. Major Artie was in front until the final couple of strides over this same track and trip two weeks ago only for Banju to run him down on the line. He presents hard fit now third up and won’t be left with any excuses himself. 3. Niffler is undefeated second up and sets up to explode with the run under her belt.
How to play it: Bold Mac to win.

There was a touch of arrogance about the way 11. Think About It won first up at Warwick Farm. The four-year-old, now with three wins from his four starts, was always in control once Sam Clipperton navigated a path off the fence. He was soft on the line. This is another step again, racing in Saturday company for the first time but from what we have seen from the son of So You Think and the scope he has, you’d be surprised if he didn’t keep surging through the grades. 6. For Valour looks to get a cosy lead on paper, which gives him the chance to get into the finish again. Has form through the right races. 3. Soami is versatile enough to take advantage of a low gate and put himself closer. Like the way he found the line. He continues to race well without reward.
How to play it: Think About It to win.