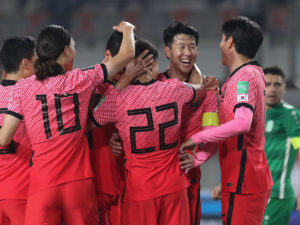 South Korea have what it takes to beat Ghana to bag three points next week, this is according to former Manchester United attacker Park Ji-seong.

According to the retired football star who is now an SBS soccer commentator, South Korea only needs to improve a bit especially in the midfield to be able to see off Ghana.

“If we make up for two things against Ghana, victory is possible. And from the middle of the second half, the entire line was pushed back by the opponent, but we have to play more actively instead of lowering the line. If so, we can get 3 points in the match against Ghana,” Park Ji-seong said after South Korea drew against Uruguay in the first match.

He believes that South Korea would have stood a better chance of making it to the knockout stage of the 2022 FIFA World Cup if they had picked a win against Uruguay.

“It would have been better if we had 3 points, but it was a very good match because it made us look forward to the next game in terms of performance,” he stressed.

That game will kick off at 1pm.