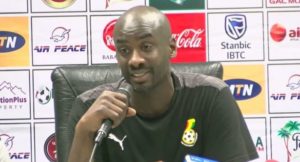 Ghana coach Otto Addo remains coy on his decision to manage a Bundesliga club after the 2022 FIFA World Cup in Qatar.

The 47-year-old’s contract with the Black Stars will end in December after signing a new contract extension after masterminding Ghana’s qualification to the global showpiece.

Coach Addo is currently focused on the Black Stars who got their campaign on a wrong note, losing 3-2 to Portugal in their 2022 World Cup opener on Thursday.

After the goalless first half, Cristiano Ronaldo opened the scoring for Portugal via the penalty spot but Ghana equalised through skipper Andre Ayew from close range.

“I am sorry this is a wrong question. I am really disappointed. I think we could have got more; we played a good match but we have zero point,” he said after the game.

“With all due respect, I don’t want to be a head coach. I like being coach and regarding the work at BvB I don’t really think about it. I am here, I will do everything for Ghana and you can ask me this question after the tournament.”