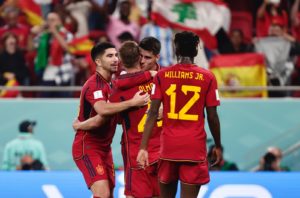 Ghana international, Inaki Williams was full of praise for his brother Nico Williams on Wednesday when he featured for Spain at the 2022 FIFA World Cup.

The younger brother of the Black Stars striker debuted for the Spain national team in September where he made a good account of himself.

Having displayed fine form in training, Nico Williams was selected by Spain head coach Luis Enrique to be part of the final 26-man squad to represent the country at the 2022 FIFA World Cup.

On Wednesday when Spain played their first match at the world cup, Nico Williams missed out on a starting role but was introduced in the second half for a taste of the action as Spain hammered Costa Rica 7-0.

After the game, Inaki Williams who was proud of his brother congratulated him.

According to sources, the two brothers are in contact in Qatar from their respective camps.

On Thursday, November 24, Inaki Williams also had the chance to play his first match at the 2022 FIFA World Cup when he featured for the Black Stars in the 3-2 defeat to Portugal.