World Cup 2022: We are under pressure to qualify from Group H – Ghana coach Otto Addo 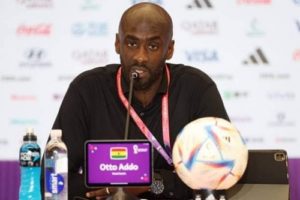 Black Stars head coach Otto Addo has admitted his side are under pressure to qualify from Group H after losing 3-2 to Portugal in their 2022 World Cup opener on Thursday.

Black Stars began their campaign on a wrong note, losing 3-2 to Fernando Santos’ side.

After the goalless first half, Cristiano Ronaldo opened the scoring for Portugal via the penalty spot but Ghana equalised through skipper Andre Ayew from close range.

“First of all, surely, we have a chance especially because they played a draw so if we win against South Korea and Portugal win hopefully against Uruguay then we will be second so the chance is still big,” coach Addo said after the game.

“And surely it will be very, very tough to beat South Korea because they are good. But now we have to win. We are under pressure but they too.”