Who is Johnny Depp’s new girlfriend? Everything you need to know about Joelle Rich 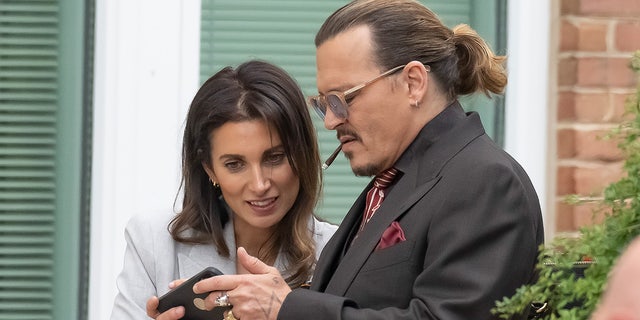 Johnny Depp is dating Joelle Rich, the married lawyer who represented him in his U.K. defamation trial against a British tabloid, Fox News Digital confirmed.

Although she was not part of the legal team that represented Depp in his Virginia defamation case against ex-wife Amber Heard, she attended part of the six-week trial, which finished in June.

The “Pirates of the Caribbean” actor was spotted with Rich while taking smoke breaks outside the Fairfax County Circuit Courthouse.

Johnny Depp smokes a cigarette as he shows his girlfriend, Joelle Rich, something on his phone.
(Ron Sachs/CNP/Getty Images)

During Depp’s Virginia trial, there were rumors that he was dating attorney Camille Vasquez, but both were quick to deny the gossip.

Here are more details about the London-based mother dating the Hollywood star.

Joelle Rich and Johnny Depp in the Fairfax County Courthouse for his defamation trial against Amber Heard.
(AP)

Rich is highly regarded in her career, as she is a partner at Schillings law firm in London.

Schillings is a U.K.-based firm that helps high-profile people protect their privacy and reputations, according to the company’s website.

“With over a decade of experience in media law, Joelle is able to astutely identify risks to clients’ privacy and reputation, devising effective strategies to safeguard them,” her company profile stated.

“She has a wealth of expertise in libel, privacy and copyright disputes, having recently been part of the team which won a major privacy and copyright case in the public eye… A highly experienced litigator, Joelle’s objective is to use the law to ensure that her clients are protected from arbitrary interference into their personal or business lives.”

Rich has been working at Schillings for more than a decade, according to her LinkedIn profile.

Soon to be divorced

The London-based attorney is separated from her husband and is in the process of divorcing him, a source tells Fox News Digital. Rich and her ex reportedly share two children together.

It is unclear how serious her relationship with Depp is, or when their romance began.

Despite working on high-profile celebrity cases, Rich seems to live a private life. Her Instagram account is set to private for her 208 followers, with well over 1,200 posts. In the lawyer’s social media bio, it showed five flower emojis.

Rich received her education at the North London Collegiate School – a top independent day school for girls aged 4-18 which was founded in 1850.

The North London Collegiate School prides themselves on their “tradition of producing independent minded young women with the drive to make the most of opportunities and a difference in the world,” according to their website.

The London-based lawyer continued her education at the University of Birmingham from 2003 until 2006 in the United Kingdom.

Afterwards, Rich received a higher education at the BPP Law School, where she took legal practice courses in Media and Entertainment, Intellectual Property and Commercial and Private Acquisitions, stated in her LinkedIn profile.

Stephanie Giang-Paunon is an Entertainment Writer for Fox News Digital. Story tips can be sent to stephanie.giang@fox.com and on Twitter: @SGiangPaunon.

Cost of living: Martin Lewis urges anyone struggling to contact local council for help you don't need to be on benefits for

Cost of living: Martin Lewis urges anyone struggling to contact local council for help you don't need to be on benefits for

How to turn on the haptic keyboard on iOS 16

iOS 16 brought a bunch of features that users have been requesting for years. For instance, you can now see the battery percentage in...
Read more
Health

Rashford getting ´back to basics´, says Man Utd legend Cole