Brazil, Neymar and Danilo out at least until the round of 16 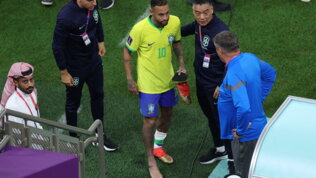 Ankle sprain for both: they will not be available for Tite in the group

Brazil loses Neymar and Danilo at least until the round of 16 of the World Cup. The Brazilian newspaper Globoesporte reports it by taking stock of the green-gold infirmary after the first match against Serbia. A double tile for Titewho in one fell swoop loses two fundamental pieces in view of the next group matches against Swiss And Cameroon. According to the outcome of the instrumental tests, both the PSG star and the Juve defender reported a ankle sprain. Both have already started undergoing physiotherapy sessions to speed up recovery times, but the situation will have to be monitored day by day.

The Seleçao, therefore, will be forced to finish the group without Neymar and Danilo. The outcome of the exams didn’t give a chance in the short term and also cast some doubts on the possibility of having them already available in the round of 16. A very heavy blow for Tite and an internal country, which in one fell swoop loses two very important players at least for the next two World Cup matches. Given the background and the many problems with Neymar’s ankles, caution is a must for the PSG striker, but for the Brazil coach all is not lost. “Neymar will play again in this World Cup“, he declared trying to reassure the environment and the fans. A statement on which, for now, however there are no certainties. Both because the round of 16 has yet to be conquered arithmetically, and because the situation of the player’s ankle is worrying given the swelling noted on the sideline shortly after the substitution A situation to be monitored day after day with the hope of a quick recovery on one side e Rodrygo ready to take the place of meanwhile Neymar.

Similar speech for Daniel. Like Neymar, the Juve defender also came out battered from the match against Serbia and the medical checks stopped him at least until the round of 16. A stop with a different weight than the PSG phenomenon, but still heavy for Brazil in terms of experience and personality. In fact, with Danilo out, the Seleçao lose a tactically very flexible player used to certain stages. A precious resource that the green and gold will certainly have to give up for the next two matches while waiting for good news from the infirmary.

News that in the meantime could continue to be bad shortly. In fact, after those of Neymar and Danilo, injuries for Brazil may not have ended here. In the last workout Anthony in fact, he had to interrupt the session prematurely and further details on the causes of the stop are awaited.

Scott Cook, CEO of the Longmont Area Chamber of Commerce, has been elected to serve as secretary on the Board of the Association of Colorado Chambers of Commerce (ACCC).

Shop local for the holidays

t-shirts for Mahsa and for freedom