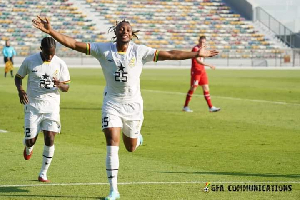 Ghana international Antoine Semenyo has expressed his disappointment in Black Stars defeat against Portugal in the 2022 World Cup opener.

The Bristol City attacker made substitute appearance in Ghana’s 3-2 defeat against the European powerhouse on Thursday.

“We don’t give up, we work hard, it’s unfortunate today but we going to the next game with the same mentality and hopefully we can get results”

“I think we still back ourselves, I feel like we got a good team and we can cause upset, so we going to the nest game with same mentality” he s

“Of course, always confidence is key, obviously the lost is unfortunate but we have to keep our heads high. We just have to build on the positives in the remaining group games”